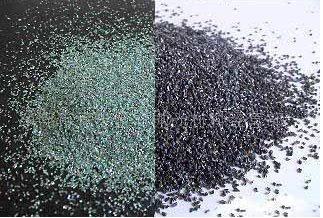 There are many preparation methods for silicon carbide raw materials, which are briefly described as follows:

In this method, metal halides, hydrocarbons and hydrogen react with each other to produce SiC when decomposition occurs. This method can be used to prepare highly purified SiC powders or to produce membranes.

Silicon carbide ceramics are difficult to be sintered. The following methods are usually adopted:

The carborundum products which are almost completely densified can also be obtained by compression sintering.

This method is also known as self - binding or silicon - cementing. It is made of -SIC and graphite powder mixed in a certain proportion and pressed into a billet, which is heated at about 1650℃, Si was infiltrated into the human body through liquid or gas phase to react with graphite to produce -SIC, and at the same time, the original -SIC particles were combined to achieve densification. This sintering does not have any size change, but the sintered body contains 8%~10% free silicon, therefore, the use temperature is limited.Reaction sintering is usually accomplished by heating graphite crucible by induction under vacuum. The equipment USES reaction sintering furnace.

Adding SiC powder to additive, put it into graphite mold, and sintering under pressure of 1950℃ and above 200MPa can be done. Then SiC products with theoretical density are obtained. Commonly used additives are Al2O3, AIN, BN, B4C, B, B C, among which Boron is the most effective additive. The practice shows that the fineness of raw material, phase, carbon content, pressure, temperature, type and content of additives have great influence on sintering.

In this method, the raw material of SiC fiber is polycarbosilane, which is used as the binder, added to SiC powder and sintered into porous silicon carbide products, and then impregnated in polycarbosilane, and then sintered at 1000℃, so as to increase the density. Repeated for many times, the volume density may reach 80%~95% of the theoretical density. The main characteristic of this method is that it can obtain high purity sum at low temperature. High strength silicon carbide material, can be manufactured in a variety of complex shapes.

This method is also called post-sintering, which is a newly developed sintering method. This is the reaction sintered and atmospheric sintering of SiC at high temperature Then recrystallization sintering (>2000℃) was carried out to obtain the dense sintered surface or object.

Silicon carbide ceramics are widely used in various industrial fields. Their uses are as follows: