As the rate of argon diffusion was slightly lower than oxygen, the sintering process was slightly different compared to the sintering in air atmosphere [20–22]. Ben Ayed et al. [23] reported that the use of argon as sintering atmosphere helps to maintain the density of sintered bodies at its highest value at much higher temperatures. Mandal et al. [24] reported that the weight loss of SiC–γ-AlON composite was higher when sintered in argon than nitrogen. Mulla and Krstic [25] reported that argon atmosphere exceeds the rate of densification for β-SiC with Al2O3 additions. As sintering could determine the microstructure of ceramics, this study aims to optimize the sintering process to control the physical and mechanical properties of ceramics. When sintered in different atmospheres, the gases present in the pores of ceramics are different, and their rate of diffusion is also different, causing different growths of particles[26–28], which would change the properties of sintered ceramics. Therefore, argon atmosphere was used in this study to evaluate the effect of sintering temperature on the microstructure and mechanical properties of 3D-printed alumina ceramics. Several characterization and test methods were used to analyze and evaluate the sintered alumina ceramics.

A 3D printer (AutoceraM, Beijing Ten Dimensions Technology Co., Ltd., China) equipped with a LED light source of 405 nm wavelength was used to print alumina green bodies (50 mm × 4 mm × 3 mm). During the printing, the exposure energy was 10 mW/cm², the single layer exposure time was 10 s, and the layer thickness was 0.1 mm. To prepare ceramic slurries, alumina powders (AW-SF, Henan Hecheng Inorganic New Material Co., Ltd., China) were dried at 200 ℃ for 5 h in a blast air oven. Ceramic slurry was prepared as follows: 495 g of Al2O3 powder was added to 100 g photosensitive resin (Al100-1, Beijing Ten Dimensions Technology Co., Ltd., China) slowly, and the reaction mixture was stirred vigorously. It was ball-milled for 2 h using a planet-type grinding mill at a rate of 400 rpm after the slurries were stirred evenly. Then, the slurries were vacuum defoamed for 10 min to obtain the alumina ceramic slurry.

Fig. 1 (a) Debinding, presintering, and (b) sintering processes of green bodies.

X-ray diffraction (XRD) patterns were recorded using a Bruker D8 FOCUS (Bruker Corporation, Germany) X-ray diffractometer equipped with Cu Kα radiation. The diffraction angle 2θ was scanned from 10° to 90°. The voltage was 40 kV, and the generator current was 30 mA. The scan rate was 0.02 (°)/s per step. The crystallite size of alumina was calculated using the Scherrer’s equation from the peak at 2θ = 35.3° as follows[29].

The bulk density of sintered samples was measured using the Archimedes method [30]. The accuracy of balance was 0.0001 g (Mettler Toledo, Switzerland).

The flexural strength of sintered samples was tested using an electronic universal testing machine (CMT4304, SUNS, China) using the three-point flexure method [31]. The loading speed was 0.5 mm/min, and the span was 30 mm.

The surface roughness of sample was measured by atomic force microscopy (Dimension Icon, Bruker, USA), and the spring constant was 0.40 N/m [32].

The nanoindentation test was performed using a nano-test apparatus (TI980, Hysitron, USA). Static indentation test was carried out at room temperature. First, the head approaches the surface of sample at a speed of 2 mN/s, and after contacting the sample, it is loaded to the maximum load of 10 mN using 5 s for loading and unloaded using 5 s after reaching the maximum load sustained for 2 s. The loaddisplacement curve was recorded using the connected computer during the entire test, and five points were tested for each sample [33].

The Vickers hardness test was performed using a Micro/Macro Automatic Hardness Testing (LM248AT, LECO, USA). The load was 1000 g, the dwell was 15 s, and five points were tested for each sample. 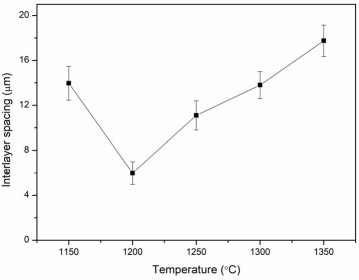 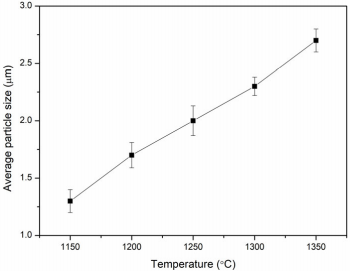 where D is the diffusion coefficient, D0 is a constant of diffusion, Q is the activation energy, R is Boltzmann’s constant, and T is the test environment temperature.

By combining the flexural strength results described in the latter part, the sintering temperature should be at 1350 ℃. Then, the micromorphology of samples sintered at 1350 ℃ obtained from TEM is shown in Fig. 6. The TEM images (Figs. 6(a) and 6(b)) show the presence of pores in the sintered samples, and some particles were connected together. The lattice fringe (Fig. 6(c)) of alumina ceramic is shown in the high-resolution transmission electron microscopy (HRTEM) image, and the lattice spacing is 0.155 nm, representing the (211) crystallographic plane of α-alumina. The selected-area electron diffraction pattern (Fig. 6(d)) indicates that the sintered alumina ceramics has a single crystal structure. The elemental distribution obtained from the TEM images of 1350 ℃ sintered samples is shown in Fig. 7. The elemental distribution images (Figs. 7(b) and 7(c)) show the uniform distribution of Al and O. The distribution of C (Fig. 7(d)) has the shape of copper microscope grid used to prepare the TEM samples. The EDS curve (Fig. 7(e)) indicates that the main elements in the samples are Al and O. Although the sintering process lacked oxygen, O was detected in the sample. This O might have arisen from the Al2O3; the debinding process would introduce some O atoms. The sample was composed of alumina, which containing O and Al. Though the sintering atmosphere was argon, there should be O in the sample after the sintering process. Therefore, the O element should be detected, and the oxygen peak could be seen in Fig. 7(e). 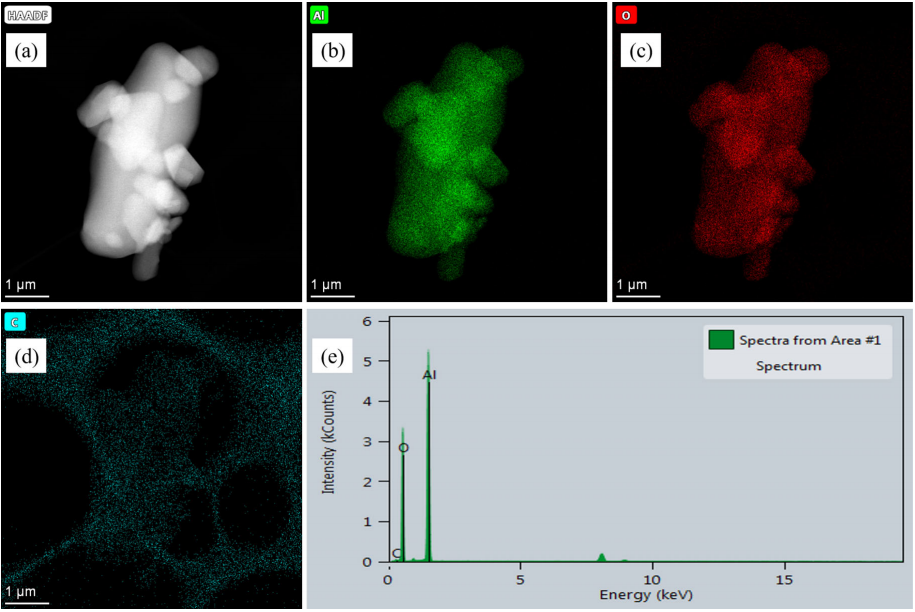 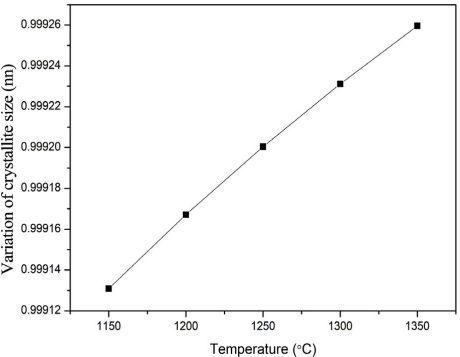 where d is the crystallite size after growth (nm), d0 is the initial crystallite size (nm), k and t are physical constants related to specific materials, R is the universal gas constant, Q is the activation energy, and n is the constant for a given grain growth mechanism. 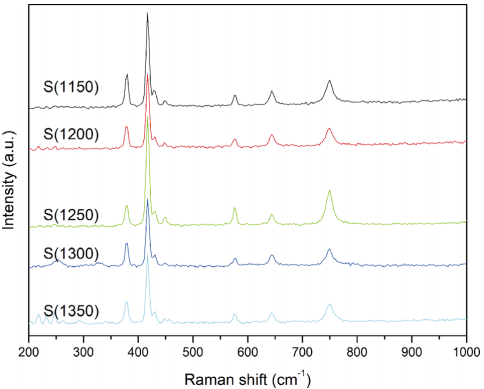 The XPS curves of alumina ceramic sintered at different temperatures in argon are shown in Fig. 11. The peaks located at 529, 117, and 72 eV represent the O 1s, Al 2s, and Al 2p, respectively. The results indicate that the sintering temperature slightly affects the state of chemical bonds. The atomic ratios obtained from the XPS of alumina ceramic sintered at different temperatures are shown in Table 1. This indicates that the elemental content of different samples is basically consistent, and the temperature does not affect the composition and content of each element. However, the ratio of O:Al was almost 1:1, indicating a lower O content for Al2O3. This is probably because of the lack of oxygen during the sintering temperature; the argon atmosphere might reduce the content of O atoms in the samples. 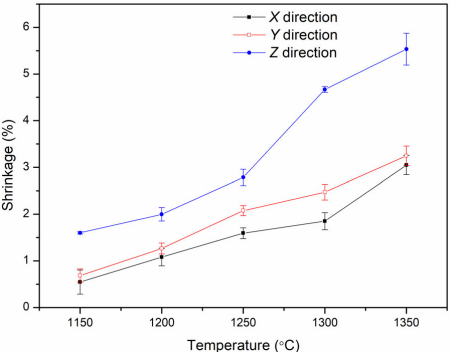 According to Ryskewitsch equation [57] shown as follows, the flexural strength of ceramic decreases with the increase in porosity. 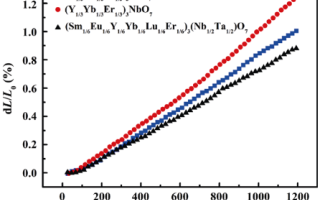 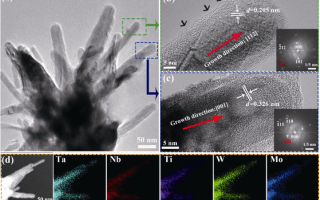 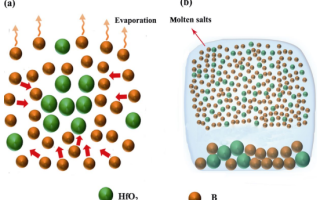 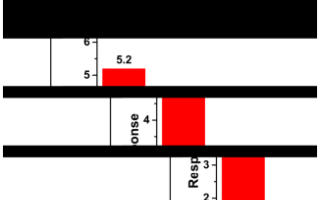 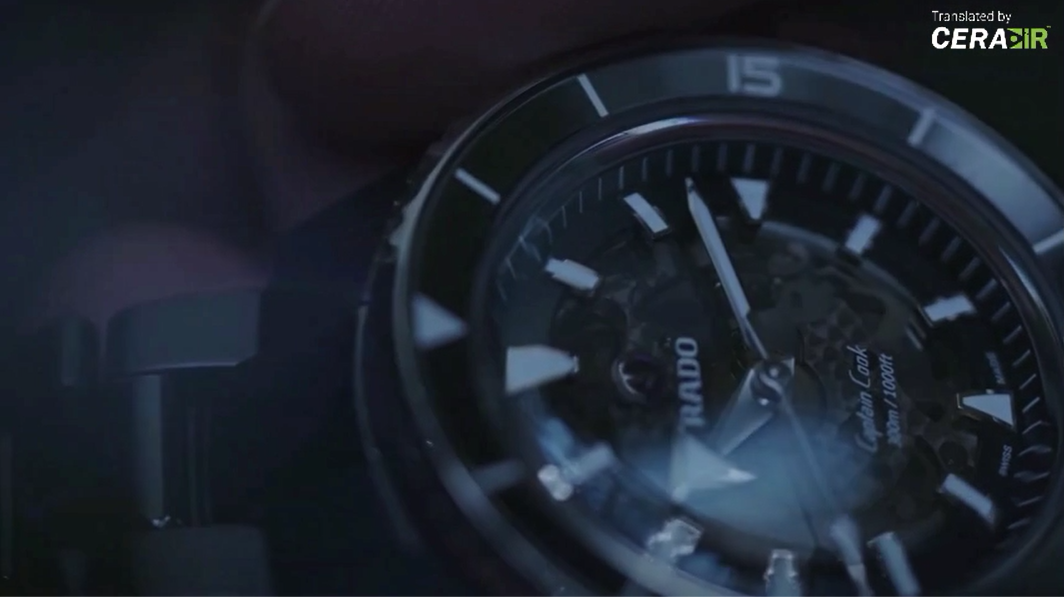