Abstract: MXenes—two-dimensional (2D) compounds generated from layered bulk materials, have attracted significant attention in energy storage fields. However, low mass loading of MXenes results in low areal capacity and impedes the practical use of MXenes electrodes. Inspired by natural basswood, an ideal architecture with natural, three-dimensionally (3D) aligned open microchannels was developed for high Ti3C2Tx mass loading. Compared with reported Ti3C2Tx electrode structure, the 3D porous carbon matrix has several advantages including low tortuosity, high conductivity and good structure stability. The Ti3C2Tx assembled with the wood carbon can deliver a high areal capacity of 1983 mF/cm2 at 2 mV/s with a high Ti3C2Tx mass loading of 17.9 mg/cm2 when used as electrode for supercapacitors. This work provides a new strategy to develop 3D porous electrodes for MXenes, which can achieve high areal capacity.

MXenes have gained tremendous attention in supercapacitor[1], lithium battery[2], electromagnetic interference shields[3] and other energy-related fields. They were firstly reported by Michael Naguib via selectively etching from MAX phases[4] (where M is a transitional metal, A is a III or IV A-group element and X is carbon or nitrogen). The resulting 2D materials, i.e., MXenes, have many chemical and structural forms with high intrinsic electronic/ionic conductivities. When applied to supercapacitors, the fast surface redox makes them possess large energy. However, although much effort have been made to obtain superior gravimetric and volumetric capacity of MXenes[1, 5], the mass loading of MXenes still needs to be further improved in order to get a high areal capacity and meet practial applications in large scale.

In 2017, Chen, et al[6] reported a fascinating work to utilize natural basswood structure for an all-wood-structured asymmetric supercapacitors design. The electrodes were
derived from natural wood and inherited its unique anisotropic structure which has numerous open channels along the growth direction. The wood based devices displayed high desirable thickness (up to ~1 mm) with high mass loading of 30 mg/cm2. With these unique features, such as low tortuosity, high electronic conductivity, enabling high mass loading, low cost and environmentally friendly, the wood-structured electrode represents a promising way to realize high power density and high energy density for green energy storage device[7-9].

Herein, we reported a facile way to make a high mass loading NaOH-Ti3C2Tx/wood carbon electrode for supercapacitors. The resulted electrode exhibited a high areal capacity of 1983 mF/cm2 at 2 mV/s with a high Ti3C2Tx mass loading of 17.9 mg/cm2, which surpass three times than that of NaOH-Ti3C2Tx reported before[10].

Ti3C2Tx(T=O, OH) was synthesized according to the paper reported before[10]. About 80 mg Ti3AlC2 powder (400 mesh (38 μm), purchased from 11 Technology Co. Ltd.) was added into the 35 mL NaOH solution (27.5 mol/L, the water was heated to boiling to reduce the concentration of oxygen) contained in a 50 mL autoclave in argon (Ar) atmosphere. Then the autoclave was heated at 270 ℃ in an electric thermostatic drying oven for 12 h. Finally, the resultant suspension was filtered with deionized water washing for several times. The obtained powder was dried at 60 ℃ for 12 h.

Natural basswood blocks were cut perpendicularly in the growth direction to afford wood slices. Then the slices were pre-carbonized in air at 250 ℃ for 6 h, followed by
carbonization in an argon flow at 1000 ℃ for 6 h. The carbonized slices were carefully polished with 2000 grit sandpaper to obtain a thickness of 700 μm and residual carbon was removed with ultrasonic washing by deionized water and ethanol for three times. To further reduce the weight and activate the wood carbon, the resultant wood carbon slices were activated in a carbon dioxide (CO2) flow at 750 ℃ for 1 h in a gas flow of 0.2 L/min.

Ti3C2Tx was loaded into the channels via vacuumassisted infiltration. Briefly, 160 mg amount of prepared Ti3C2Tx powder was dispersed in 10 mL ethanol via sonication for 30 min. The as-prepared wood carbon was placed on a filter funnel and then the obtained homogeneous ink was dripped into the wood carbon matrix along the microchannels after vacuum filtration using a turbo pump. The wood carbon filled with Ti3C2Tx was treated by freeze-drying for 48 h. The mass ratio of Ti3C2Tx with wood carbon was ~ 1 : 2.4.

Ti3C2Tx was synthesized from bulk material Ti3AlC2 via hydrothermal method (27.5 mol NaOH, Ar atmosphere, 270 ℃). The raw material Ti3AlC2 was shown in Fig. 1(a). The bulk Ti3AlC2 material was made from Ti2AlC and TiC by a hot pressing sintering method[11].  There were some impurities such as Al2O3 (See XRD patterns of Ti3AlC2, Fig. 1(c)) during the synthesis process. After alkali treatment, sheet structure emerged in obtained Ti3C2Tx (Fig. 1(b)), which indicated the successful etching of Al atoms. It was also supported by X-ray diffraction (XRD) that the rising peak at 2θ≈7.5 corresponding to (002) plane of Ti3C2Tx. The morphology of NaOH-Ti3C2Tx was different from accordion-like HF-Ti3C2Tx via high concentration (50wt%) HF treatment but similar to low concentration (5wt%) HF treatment[11]. It is noted that the position of (002) peak in NaOH route is similar to HF etching route followed by sodium intercalation[12], which indicates that NaOH treatment has the same effect. Furthermore, we also performed Transmission electron microscopy (TEM) analysis to observe the morphology of Ti3C2Tx. Lamellar stripes can be observed in the edge of Ti3C2Tx sheets and the interlayer space was ~1.2 nm. The space was larger than that of hydrofluoric acid (HF) method, which can be explained by sodium intercalation during the hydrothermal process. SEM was used to observe the structure of wood carbon. Fig. 2(a) showed the top-view of wood carbon, where multi big channels (30-60 μm) were surrounded by numerous small channels (5-10 μm). From the crosssectional view (Fig. 2(b)), we can clearly observe that almost all channels were aligned straight from top to bottom. Furthermore, there were some mesopores (high magnification image in Fig. 2(b)) existed in channels, which were beneficial to diffusion of electrolyte. Next, Ti3C2Tx ink was made via sonication in ethanol for 30 min and then dripped into the wood carbon with a vacuum filtration method. SEM images showed that multilayer Ti3C2Tx was successfully injected (Fig. 2(c, d)). However, Ti3C2Tx was not uniformly distributed in the channels of wood carbon. Some channels were filled with Ti3C2Tx, while some were empty, which may not take full use of wood structure and every single Ti3C2Tx. Since wood displayed anisotropic structure with vertical micro-channels serving as the high transport pathway of ion transport in the electrode, we thus tested the supercapacitor performance of Ti3C2Tx/wood carbon. The supercapacitor performance was evaluated using a three-electrode cell with 1 mol/L H2SO4 aqueous solution
serving as the electrolyte. To the best of our knowledge, Ti3C2Tx is stable from –1.0–0 V vs. Hg/HgSO4 while the wood carbon is stable from –0.5–0.5 V vs. Hg/HgSO4 according to our experiments (Fig. 3(a)). Therefore, –0.5–0 V was chosen as this potential range which was suitable for both of them. Fig. 3(b) showed the CV curves of Ti3C2Tx/wood carbon. Different scanning rates ranging from 1 to 20 mV/s were applied. For wood carbon, the CV curves were nearly like rectangle shape which indicated fast charge transfer in the electrode and the wood carbon exhibited high areal capacity of 1030 mF/cm2 at 2 mV/s. For Ti3C2Tx/wood carbon (mass loading: 17.9 mg/cm2), the area of CV curves were relatively larger than that of bare wood at the same potential range and the performance was 1983 mF/cm2 at 2 mV/s, representing good values among Ti3C2Tx electrodes reported before[10]. Even at 20 mV/s, the capacity of Ti3C2Tx/wood carbon electrode still maintained 1539 mF/cm2. GCD curves of Ti3C2Tx/wood carbon were showed in Fig. 3(c). The linear GCD curves with triangular shape suggested ideal capacitive behavior, while the repeated GCD curves at 10 mA/cm2 for 104 cycles indicated good stability (maintained ~92%) for Ti3C2Tx/wood carbon electrode (Fig. 3(d)). 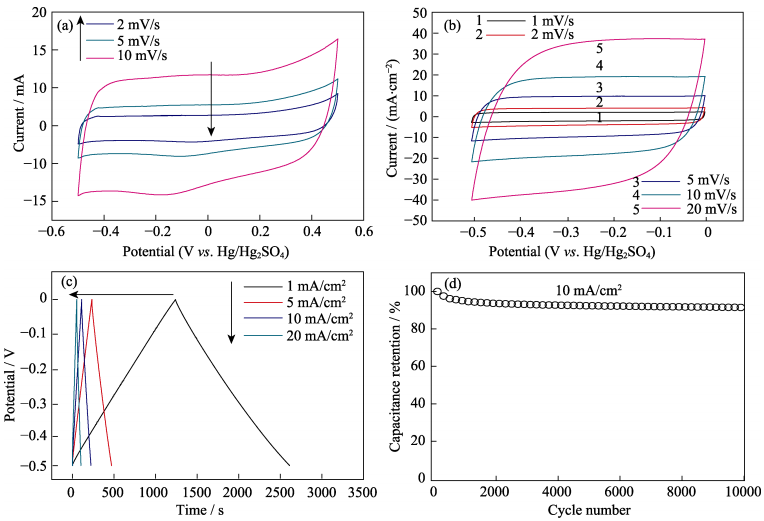 In conclusion, we have demonstrated wood-based Ti3C2Tx electrode a unique structure for supercapacitor to achieve high areal capacity. Open channels of wood benefit fast
and efficient transportation of ions. When Ti3C2Tx was combined with wood carbon, a high areal capacity (1983 mF/cm2 at 2 mV/s) of with high mass loading (17.9 mg/cm2) was achieved. This work also inspires us to explore other natural structure, which may possess fascinating properties in combination with other materials.